Linux: CPU usage artificially capped somehow? – Managing your servers can streamline the performance of your team by allowing them to complete complex tasks faster. Plus, it can enable them to detect problems early on before they get out of hand and compromise your business. As a result, the risk of experiencing operational setbacks is drastically lower.

This is the CPU usage graph of a server: 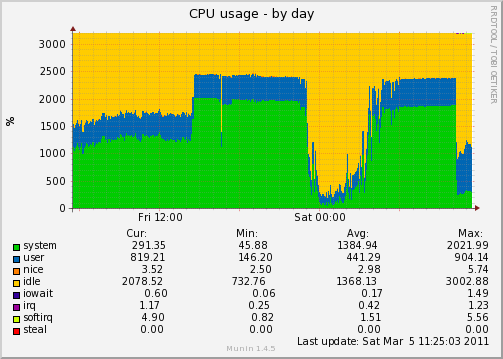 It seems that the CPU usage reached a hard limit at 24. This is a 32-core server so it should be able to go beyond 24 with ease. But that’s not the case.

Is it possible that there’s a cap on CPU usage on this server. How do I find out?

By the way, this is a database server running Percona (MySQL) Server 5.1 on CentOS 5.5

You might be I/O or memory limited, rather than cpu limited. Your cpu won’t burn cycles just to burn cycles if it’s stuck waiting on disk, network, or memory. It could also be a software limitation, if you’re using something that’s not written to be aware of more than 24 cores.

You have to see the CPU utilization for each CPU. I am using dstat -ta 10 to see that. Because the graph is a straight line it rules out that the load could be I/O bound. Now you have to see why MySQL is not using all CPUs. See also: http://dev.mysql.com/doc/refman/5.5/en/connection-threads.html