Network Restructure Method for Double-NAT network – Managing your servers can streamline the performance of your team by allowing them to complete complex tasks faster. Plus, it can enable them to detect problems early on before they get out of hand and compromise your business. As a result, the risk of experiencing operational setbacks is drastically lower.

Due to a series of poor network design decisions (mostly) made many years ago in order to save a few bucks here and there, I have a network that is decidedly sub-optimally architected. I’m looking for suggestions to improve this less-than-pleasant situation.

We’re a non-profit with a Linux-based IT department and a limited budget. (Note: None of the Windows equipment we have runs does anything that talks to the Internet nor do we have any Windows admins on staff.)

All regular internet traffic goes through the CentOS 5 router server which in turns NATs the 192.168/24 subnets to the 10.0.0.0/24 subnets according to the manually-configured routing rules that we use to point outbound traffic to the proper internet connection based on ‘-host’ routing statements.

I want to simplify this and ready All Of The Things for ESXi virtualization, including these public-facing services. Is there a no- or low-cost solution that would get rid of the Double-NAT and restore a little sanity to this mess so that my future replacement doesn’t hunt me down?

Basic Diagram for the main office: 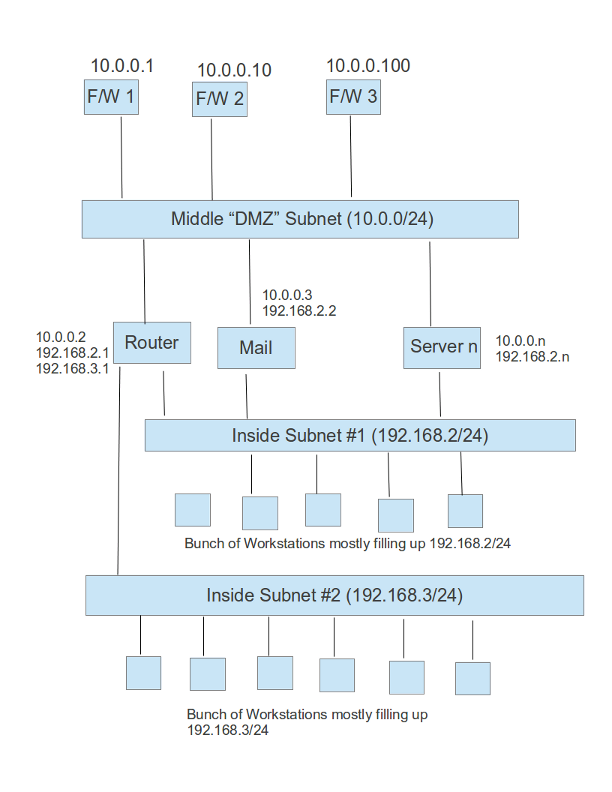 These are my goals:

1.) Before basically anything else get your IP addressing plan straightened out. It’s painful to renumber but it’s the necessary step to arrive at a workable infrastructure. Set aside comfortably large, easily summarized supernets for workstations, servers, remote sites (with unique IP’s, naturally), management networks, loopbacks, etc. There’s a lot of RFC1918 space and the price is right.

2.) It’s hard to get a sense of how to lay out L2 in your network based on the diagram above. VLAN’s may not be necessary if you’ve got sufficient numbers of interfaces in your various gateways as well as sufficient numbers of switches. Once you’ve got a sense of #1 it might make sense to reapproach the L2 question separately. That said, VLAN’s aren’t an especially complex or novel set of technologies and needn’t be that complicated. A certain amount of basic training is in order, but at a minimum the ability to separate a standard switch into several groups of ports (i.e. without trunking) can save a lot of money.

3.) The DMZ hosts should probably be placed onto their own L2/L3 networks, not merged in with workstations. Ideally you’d have your border routers connected to a L3 device (another set of routers? L3 switch?) which, in turn, would connect a network containing your externally facing server interfaces (SMTP host, etc). These hosts would likely connect back to a distinct network or (less optimally) to a common server subnet. If you’ve laid out your subnets appropriately then the static routes required to direct inbound traffic should be very simple.

3a.) Try to keep the VPN networks separate from other inbound services. This will make things easier as far as security monitoring, troubleshooting, accounting, etc.

4.) Short of consolidating your Internet connections and/or routing a single subnet via several carriers (read: BGP) you’ll need the intermediate hop before your border routers to be able to redirect in- and out- bound traffic appropriately (as I suspect you’re doing at the moment). This seems like a bigger headache than VLAN’s, but I suppose it’s all relative.